To make ends meet in an modern monetary economy consumption has to match output. Therefore it is required to inject a stream of credit into the economy to avoid deflationary breakdown.
Why is that?
Because disposable income is always smaller then output.
Why is that?
Because prices can and are set in a cost plus fashion and the profit = monetary surplus gained by selling output at cost plus prices is more and more saved = accumulated in the financial system as monetary savings to build up liquidity and to generate income from interest and or speculation. This leads to a constant growth of bank balance sheets. If the cost plus priced output (flow) is exceeding disposable income (flow) by 5% an injection of a credit flow of 5% of output (flow) is required to keep output (flow) and consumption (flow) in balance. Since this flow of credit is accumulated, a linear growing economy shows an exponential growth of accumulated credit = debt accounts (stock). The same is true for the liability side of the banking balance sheet, where the savings (flow) are accumulated on savings accounts (stock). The idea/illusion an economy as a whole could repay its accumulated debt leads direct into a deflationary scenario and is terrible misleading. In an stable economy with constant output (flow) and prices set as cost plus prices to achieve profit a constant flow of credit has to be injected resulting in a linear growing debt (stock).

The graph below shows the development of credit flow (yellow), accumulated credit=debt stock (red) in an economy where cost plus priced output flow (blue) is exceeding disposable income flow (green) by 5% and output is growing in a linear fashion. The black line shows debt (stock) as a percentage of output=consumption=(disposable income+credit) (flows) and is approaching 250% after 100 periods/years in this example. After 37 years debt (stock) as a percentage of output (flow) crosses the 100% mark. If the savings (flow) = credit injection rate =growth of bank balance sheets is higher then 5% of output (flow) the periods/years needed to get to these marks is shorter. In this example growth of output in absolute terms is constant = linear so the YoY growth as a percentage declines in an exponential way towards 0 (see red line in 2nd picture). When you look at an economy that grows output in an accelerated fashion, with the aim to have a constant YoY growth as a percentage, all other things accelerate accordingly. However due to saturation effects things tend towards a constant output (flow) which requires a constant flow of credit and with that a linear growth of the debt accounts (stock) as long as a cost plus pricing can be set by mighty monopoles or oligopoly structures and drives savings accounts (stock) up. 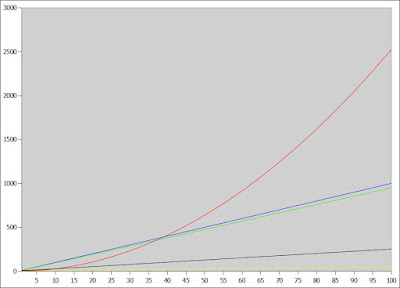 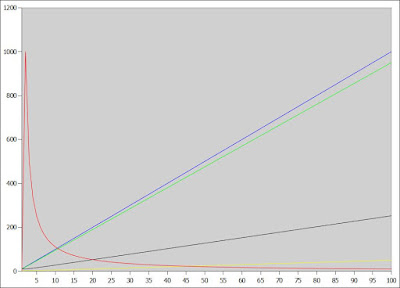 In conjunction with the ever increasing concentration of real capital AND!!! financial capital (Fettaugensyndrom) this creates a severe problem, that leads into collapse and war when not dealed with in an appropriated way. When the economy approaches a debt level of 400% of output (all sectors have accumulated 100% of yearly output as debt) a mental barrier is reached, because everyone recognizes that this debt can't be repaid. Due to the concentration processes which run in parallel with the development described above, an absolute bizzar situation arises. Not only real capital like land, machinery, company ownership etc. concentrates more and more in the hands of a few, but financial capital like money as well. But that is the topic for Disequilibrium Economics 101 Part 2. Stay tuned.

P.S.: Thanks to PFH007 to tweet the following picture, which inspired this thought/way to explain one of the severe problems of out of equilibrium economies. 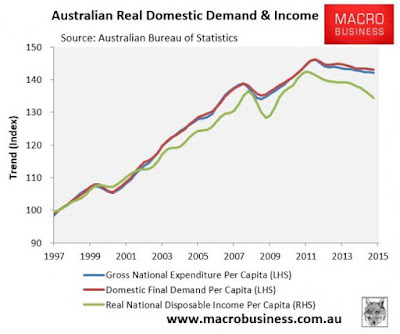 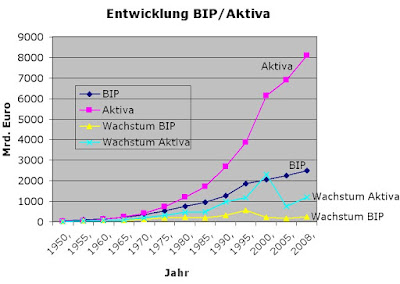