The Evidence of Disequilibrium

In my recent posts (1,2,3) I advocated a view contrary to the deceptive and misleading view of mainstream economics, which is based on a already falsified loanable funds theory (4) and on obvious false general equilibrium theories. A very disturbing fact is, that there is a lot of data available, but to a great extend ignored, showing clear evidence of and documenting escalating disequilibrium. Most obvious for common people is the out of balance trade of almost all countries in the world (5). Almost every country has a trade surplus or a trade deficit. In most cases current accounts follow the trade inbalances. It is no problem to have out of balance trade of one or the other way, as long as the balance accumulated over time stays close to zero. But as soon as the country with the largest current account deficit, the USA, shows a permanant deficit, this is becoming a very serious problem for the world over time. When you look at it on a yearly basis the last time the current account was in the positive region for the US in 1981 with one exception in the early 90s.

(billions US$ per quarter)

Since then the US accumulated a current account deficit with the world of more then unbelievable 10 trillion US$.

Meaning that the US imported for more then 10 trillion US $ more goods and services as it was able or willing to deliver to the world in the past 35years. On the other side of that equation are 88 countries who have a current account surplus with the US. And they piled up a 10 trillion US$ stack of paper (mainly US$, US treasuries and other triple A rated US papers) in return for the goods and services delivered to the US. At the same time the US industries degenerated in a significant way. Only 7% of the US work force is working in industries that produce something real.
All others are occupied with services of all kinds. In parallel the part of income derived from labour sunk while so called capital income grew. 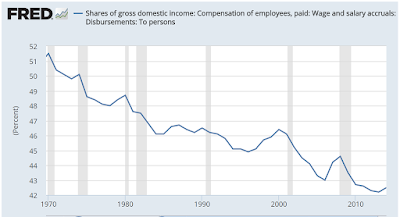 But as everyone should know, money and capital never works. Only humans do the work. And it appears that this work is done in a few centers of extrem industrial hyperproductivity. China, Japan and Germany to name just the largest examples. An other astonishing sign of disequilibrium and out of balance behaviour is the fact that the US is using 2x the primary energy per capita compared to highly advanced and productive economies like Japan and Germany for example. And the US consumes on a per capita basis 4x of the primary energy produced in the world compared to the average of all countries.

Source
And that is an other huge problem, which can't be solved by money and interest policies. It is nuts to believe that an interest hike here and some policy changes there will adjust things in a way that not only stops the escalation of the problem but reverses things so that the countries which delivered in sum a tremendous amount of real goods and services for paper to the US in the past 35 years so that they will get something real in return from the US for that money and treasuries accumulated so far.
But not only between countries you see these inbalances. When you look into the economies and societies, be it the US, UK, Japan, China or Germany, you see the same thing. On the level of companies and on the level of individuals. There are a few extremly cash rich companies like Apple, who don't know what to do with the cash and many companies that are cash starved and have to go into debt to keep going. Also the fat tail distribution of company sizes is a clear sign of disequilibrium. And the distribution of whealth on the level of individuals is showing the same pattern of fat tail distributions. So it can be said that this is a scale invariant phenomenon, which again is typical for out of equilibrium systems. An other observation is that the distributions are not stationary but have a tendency to grow towards higher and higher inequality. There is a theory that explains that. But no one wants to know this. Mainstream economics appears to be blind and deaf for all this evidence. Even in the light of the most severe crisis after the great depression in the last century. More then 8 years of endless and fruitless discussions running circular arguments since then are more then enough hybris and ignorance. And it is not only me who is sick of it. If mainstream economists want to continue going hand in hand with the taliban of finance industry and banking fascists in ignorance of the evidence and pushing politics into the wrong direction based on falsified loanable funds theories and obvious false general equilibrium theories, they are free to choose so.
But, and this is a serious but, they should not wonder when they end where all ideologicaly blinded (fascists) end.


By the way, the UK is an other economy dominated by its out of proportion finance industry and shows the same signs of degeneration as the US:

And Germany is one of the 88 economies  holding and building up the counter position
Accumulated current account surplus (billions Euro) of Germany with US and UK alone.

Chinas accumulated current account surplus with the world (mainly US)

Thanks to Steffen Bogs who runs the highly recommended fact based blog "Querschuesse" for providing the charts based on public available data.
Eingestellt von Georg Trappe um 05:09