Investors, banksters and the seneca effect

As some readers may know, I consider the findings of Fargione et. al. (1) in conjunction with our bank and money system the key to understand todays escalating economic and political problems. To under stand how our money and banking system works I recommend reading R. Werners paper (2). To understand what "Investors" and banksters really do I recommend this articel (3).
With those prerequisits and knowing the seneca effect (4) you are able to understand why the way our economies work, is leading straight into desaster.


Because this results, on the one hand, in the possibility of an initially exponential
growth on the basis of the "success formula" of continual and consistent
reinvestment of surpluses into productivity-enhancing measures and, on the
other hand, the parallel running of the Fettaugen syndrome with the constantly
advancing concentration of capital in the form of real and financial resources
in the hands of fewer and fewer people (= hierarchy and structure formation).
If we consider the attemps of the banking / money / financial and valuation
system as unsuitable attempts to solve the real problems and leave them out
in a first view and consider only these two parallel, real, empirically
demonstrable developments as characteristic, then the negative repercussions
on the development of GDP can be attributed to a constantly increasing
productivity (tendency to deflation / price decline), the concentration
of production and finance in the hands of less and less people, the exclusion
of more and more people from the production process and thus the exclusion of
the possibility of demand, and represented in a time-dependent parameter:

Which is coupled to the development of the linear increasing Theil index
in the case of  Fettaugen syndrome. Here, B is a constant which describes
the rate of the increase of the Theil index and the contracted production
problems triggered thereby. This term is thus a representation of the
resources "cohesion and social peace through participation and justice",
which is reduced by the progressive concentration of capital.
For GDP, the product results from exponentically increasing productivity and
this linearly decreasing resource.

That is, the difference between two exponential developments develops, in which
the positive term dominates at first, but with progressive time the negative
term takes over the regime. 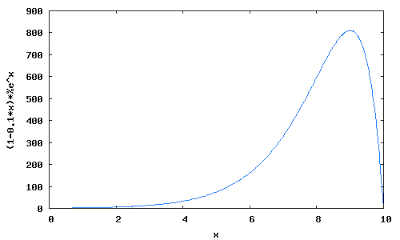