No way! Not with me! Never ever again!

My father, born in 1923, was drawn into the Wehrmacht in 1941. He was sent to fight in Russia, where he was hit by a sniper bullet from the back in his left upper arm, leaving his arm and hand almost unusable for the rest of his life. If the bullet would have hit him 10 cm more to the right, he would have been dead. He told us, my brother and me, what he experienced as a soldier. He didn't do that often, but when he did, he did it in an impressive way. The most impressive picture he brought across, was a march along a road, where comrads, who tried to run away from the front, were hanged on their feets at trees with signs attached onto them, saying "Deserteur".

So much about the glorious german military leadership and its motivational practices.
My father did not use this as an excuse, but to teach us to mistrust every authority.

By he way my father grew up in a catholic family and stayed as a loyal christian to the catholic church for his entire life. 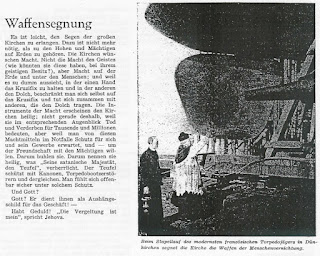 He did forgive the church that they blessed the weapons when the soldiers left their towns for the front. I guess, he just needed something to hold on.

His brother, my uncle, returned from Russia in the early 50s. He was 4 years younger and drawn into this war at its very end. He had similar grewsom stories to tell.
My fathers Uncle, who was a soldier in both world wars, gave me books to read about Verdun and the gas war. My mothers mother lost her only son in Belgium. She visited with us one day the graveyard, the cemetry where all those crosses were telling names, birhdays and day of death of those "heros". I was shocked. A field as far as my eyes could see. Full with graves of young people, most just 18,19, 20 years old when they died for Führer and Vaterland.
I have seen pictures of the home city of my parents and what used to be their houses.
I have heard my grandmother telling terrible stories about the bombardment of her home city and how she with my mother, just 14 years old at that time, hide in the cellar and were brought to other towns in Germany, when the front came close. 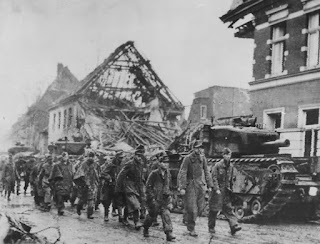 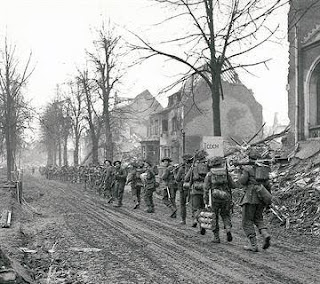 I have seen pictures of her, where she is just skin and bones because of hunger. I heard her telling us, how they gave away everything they had, for something to eat. Just to survive.

And I had tears in my eyes when I wrote this up the first time.

I just don't want to see something like this happen again.

No way! Not with me! Never!

Not because some bastard banksters claim to be the Masters of the Universe and think they can push people into war again, just because their scam becomes obvious as such.
It makes no sense to kill people you don't know, just because someone you should know better, tells you to do so.