"U.S. presidential candidate Donald Trump has said he is open to the idea of both Japan and South Korea developing their own nuclear weapons and would be willing to withdraw U.S. troops from their soil, the New York Times reported in its online edition Saturday.

In an interview with the major U.S. newspaper, the front-runner for the Republican presidential nomination said that allowing the two countries to have their own nuclear arsenal would reduce pressure in the United States to come to their defense against North Korea and China.


Asked if he would consider removing troops from Japan and South Korea unless the two countries paid more to cover the costs of housing and feeding them, Trump said “yes.” “I would not do so happily, but I would be willing to do it,” the New York businessman and billionaire said."


Since the trick of recycling US IOUs for triple A rated IOUIOUs doesn't work anymore (1, 2 ,3), the US is in a desperate search for a justification for what it does to over 80 countries of the world.
How sick the response of so called economists to this problem is, can be seen here.
No wonder that characters like Donald resort to what the mafia calls Schutzgelderpressung.
By the way, the majority of japanese people would be more than happy if the US military would leave its territory. But it is the japanese 1% who has build its power on this unsustainable arrangement and therefore will do everything to keep it going.

How the US Became an Oligarchy (and some more)

Mervyn King explains banking and its consequences in one sentence

The Telegraph is promoting a new book written by the ex head of BoE Mervyn King. In a recent articel King was cited saying:


"Unsustainably high and low spending around the world led to large trade surpluses and deficits, creating a “disequilibrium” between major economies."

This describes the business model of banks in just one sentence, because high spending is promoted by banks with giving credit = creating money and low spending is promoted  by encouraging savings at the same time. The difference between interest on credit and savings is the source of income for the banks. So banks have a strong incentive to grow the base of this business, which is the size of the bank balance sheet. To do so, they create a mismatch between the rate of credit/money to be repaid (destructed) and the rate of money released by savers and fill this gap with new created money / credit. This leads to an ever growing bank balance sheet = record of out of balance trade and therefore a ever growing income for bankers out of interest differentials on money created out of nothing. If banks stop growing their balance sheets / the credit = money supply, the economy goes into a deflationary downward spiral, because it is starved of liquidity by savers aka "investors" who still achieve a growing pool of savings=extraction of liquidity, thanks to a stochastic multiplicative process called "investing" which is also heavy promoted by banks as a major playground aka financial casinos for "investors" since it is an other important source of income for banks. 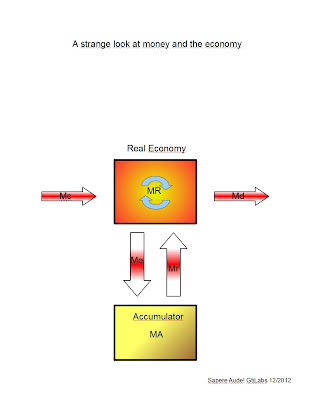 By the way, this result of gods work = bank business = unsustainable and very destructive disequilibrium does not only exist between major deficit economies like the US, the UK and surplus economies like China, Japan, Germany but also inside economies between a few extremly cash rich mega companies and debt burden smaller companies as well as with a few extreme cash rich individuals aka 1% and hugh pool of cash starved individuals relying on social wellfare and charity.

It is astonishing that it took Mervyn King his entire Career to discover this problem just now. It became very obvious, when the US FED under Volcker made it the basis of its business model in the early 80s. And it is not that new at all. Merkantilism (e.g. East India Company) is probably the most prominent example of its destructive powers in history.


P.S.: By the way, it is not known, how Mervyns message is received by the phalanx of high paid economists not only at the BoE, who justified and are still justifying the disequilibrium maximizing policy decisions of central bankers with absurde General Equilibrium Theories;-).
May be they consider it an "external shock", that drives things to the next new equilibrium  Mervyn is talking about in his latest articel, which he is concluding with the following sentence:

"The underlying challenge is to move to a new equilibrium in which new debts are no longer being created on the same scale as before."